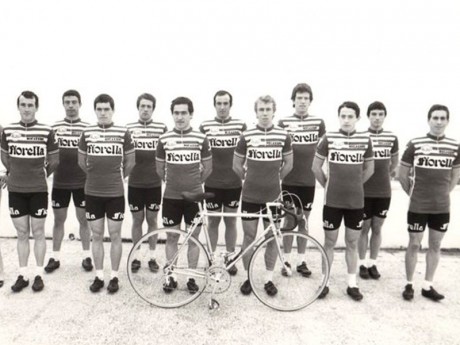 The "FIORELLA MOCASSINI" was the first major team that dressed the Parentini clothing, with historic cycling jerseys, made of wool. The Green and White jersey, realized with horizontal lines, was an idea of the President Alberto PAGNI, made by Giampaolo PARENTINI at the beginning of his job. It was the first jersey with three lines on the side panels.

In 1975 and 1976 the FIORELLA has set up a team of young people in the category "AMATEUR" led by Carmelo BARONE and Riccardo MAGRINI, which also includes Vito DI TANO, world champion in cyclo-cross, considered the best Italian club. Were part of the team too, BONINI Antonio, CARDELLI Alessandro, Andrea Checchi, MEZZANI Marzio and PALEARI Ignazio.
Among the many victories stands the Gold Medal won by Carmelo Barone at the Mediterranean Games.

In 1977 the "FIORELLA Moccasini" made its debut in the Professional world and introduced in the Team - which came from the Amateurs- MONTREAL 1976 Olympic Champion Bernt JOHANSSON, the Swede, the Australian Clyde Sefton, and experts Mauro SIMONETTI and Gianluigi ZUANEL.
The team was composed (made up) of: BARONE Carmelo, BONINI Antonio, CARDELLI Alessandro, CHECCHI Andrea, JOHANSSON Bernt, MAGRINI Riccardo, MEZZANI Marzio, PALEARI Ignazio, SEFTON Clyde, SIMONETTI Mauro and ZUANEL Gianluigi.
In the first year of professionalism Carmelo Barone won four races, including the BERNOCCHI Cup. Bernt JOHANSSON won
two races and the general classification at the Vuelta in Levante, Spain. The two together won the BARACCHI Trophy, in pairs time trial.