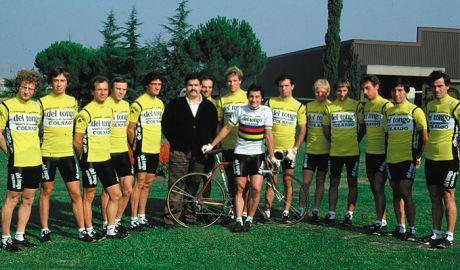 Del Tongo Colnago Team with Giuseppe Saronni, 1982 World Champion in Goodwood (UK), at the beginnig of the new season 1983, and Giuseppe Saronni Winner of the Giro d’Italia 1983.

In 1983 Parentini makes the qualitative  leap since it is the supplier of the most important professional team , the " DEL TONGO COLNAGO " composed of 13 athletes , with the Goodwood 1982  World Champion  GIUSEPPE SARONNI.

Parentini  previously collaborated with the DEL TONGO, dressing for several years the amateur team sponsored by the company of Arezzo.

The debut in the classic of Spring, in March 1983, was as good as possible with the victory of GIUSEPPE SARONNI, in rainbow jersey, of the Milano-San Remo. Then continuing with the SARONNI victory in the Tour of Italy with a superb performance from the whole team, surpassing the other Italian VISENTINI. In that Giro Giuseppe SARONNI  won three stages, the Pink LEADER jersey of the General Classification and also won the Points Classification.

In 1984 the team was reinforced with the arrival of Emmanuel BOMBINI and neo pro Francesco Cesarini, but the season for Giuseppe SARONNI was not the best for various physical problems and then came the victories of Guido VAN CALSTER in two stages of the Vuelta of Spain with the classification POINTS, and in a stage at Giro of Andalusia, and the victory of Sergio Santimaria in a stage of the TOUR of Italy.